Most bike hire companies are also tour organisers, and while they do a very good job they provide packages rather than custom-plan, which of course is a key benefit of self-planning where you’ll engage directly with accommodation hosts, bus companies, rental vehicle businesses, etc.

Aside from bikes, many manufactured specifically for the Rail Trail, cycle hire companies will also transport your luggage from one night’s accommodation to the next and also passenger you to/from the Taieri Gorge Railway Pukerangi Station and Middlemarch.

If you or a member of your party are not the fittest or are of an age where joints are protesting do remember to ask about hiring electric-assist cycles. 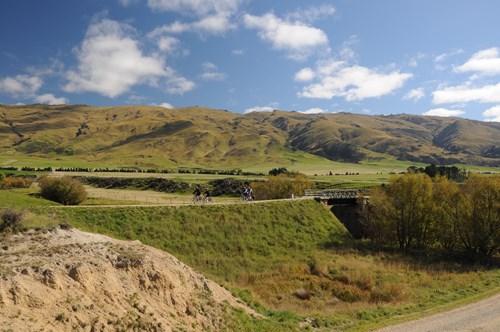 GETTING TO THE RAIL TRAIL AT MIDDLEMARCH

Dunedin to Middlemarch on board the Taieri Gorge Railway

Rated one of the world’s best train journeys, it’s no wonder the Taieri Gorge Railway is the recommended ‘must-do’ mode of travel from Dunedin to the Middlemarch start of the Otago Central Rail Trail.

Most days the train travels from Dunedin to tiny Pukerangi Station, 20km south of Middlemarch. The train’s popularity means lots of bike hire and other shuttles run between Pukerangi and Middlemarch.

Departure times from the magnificently ornate Dunedin Railway Station to Pukerangi are 9.30am and 2.30pm, arriving at 11.35am and 4.35pm.

Should you land at Dunedin Airport and want to get on to the Rail Trail pretty much straight away, consider boarding the train at Wingatui (a short taxi ride away). But doing this of course depends on flight arrival times with the train's arrival at and departure from Wingatui. Our advice is to phone Dunedin Railways at 03 477 4449.

Rental vehicles are available at Dunedin Airport and in Dunedin itself to self-drive to Middlemarch. An idea - especially when wanting to do the Rail Trail with a non-cyclist - can be to hire a rental as a support and side-trip adventuring vehicle. See our 5 Day Itinerary for just how much a support vehicle can add to a Rail Trail experience.

How's this for an idea

Spending at least a few hours exploring Middlemarch will surprise you with just how much there is to see… from outdoor artwork to the remains of an historic submarine built for mining gold river beds to New Zealand’s only salt lake.

Even with an electric-assist mountain bike (e-bike), cycling the Rail Trail from Middlemarch in just 3 Days calls for more planning than starting from Clyde. The reason is Day 1 distances are relatively long.

Even with an electric-assist mountain bike (e-bike), cycling the Rail Trail from Middlemarch calls for more planning than starting from Clyde. The reason is Day 1 distances are relatively long and choices of accommodation limited. Or so it seems.

"What a Diff'rance a Day Makes". The title of this timeless song says it all. Perhaps the most significant difference between four and five days is being able to ride fewer kilometres each day, and that generally means less time on the saddle.

Please check our blog articles for more insights into the wonderful sceneries and activities in store for you.